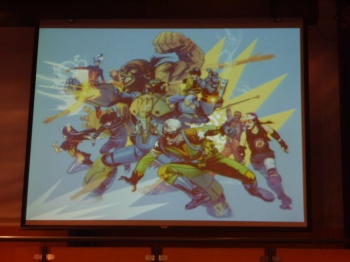 Now that X-Men: First Class is almost out, director Matthew Vaughn has revealed he wants his next flick to be about retired heroes.

Matthew Vaughn just can't seem to stop making movies based on comics. Between Kick-Ass, X-Men: First Class, the man has demonstrated a love for young heroes; however, his next project is going to be about retired superheroes, and he really wants to get some A-list talent involved with the movie.

Vaughn is working on an adaptation of The Golden Age (a rough picture of which is seen here), a comic book by Jonathan Ross and Tommy Lee Edwards about a superhero retirement community. The basic premise sounds like a lot of fun: a group of retired heroes put the tights back on one more time so they can help their grandchildren save the world (after the kids' parents do a crap heroic job and endanger the world).

Not much other info about the project is available yet, but Vaughn is reportedly hoping to some big-name (and old) actors like Jack Nicholson, Clint Eastwood, and Warren Beatty in starring roles. Personally, I'd be totally down with watching The Joker team up with Dirty Harry and Dick Tracy, so hopefully this movie gets the cast Vaughn wants.