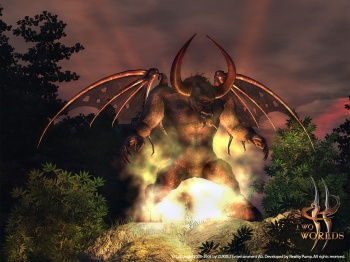 There's a new Two Worlds game coming out next year, though we're not sure if that's a promise or a threat.

Two Worlds II was a bit of a surprise when it was released: Folks were a bit wary of it because of its predecessor's dubious quality and the numerous delays it got hit with (presumably due to the legal troubles that plagued publisher SouthPeak Games), but it turned out the game didn't suck. Now, developer TopWare has announced that it's planning to release a new Two Worlds game next year.

TopWare's managing director James Seaman broke the news when he commented on a Destructoid story about how his company was puportedly blacklisting low-scoring Two Worlds II reviews. After denying the allegations, Seaman revealed the following:

"We are trying to do a better job every time and have brought in a brand new 3D modelling, animation and CG team for the next Two Worlds game coming out in 2012."

Ironically, the revelation of the new game was made days before Two Worlds II is due to be released in the U.K. Judging by the drastic improvements that were made for Two Worlds II, this next title will (hopefully) be great.