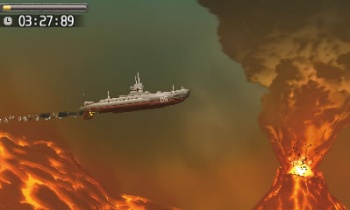 If the idea of playing with a puppy after a few hours of being a submarine commander sounds appealing, then the 3DS is probably the handheld for you.

There are three first party titles launching the with the device: Pilotwings Resort, the submarine game Steel Diver, and the pet-simulator, Nintendogs + Cats. There are also a number of other Nintendo-made games due out later this year, like 3D remakes of Ocarina of Time and Star Fox 64, and new Kid Icarus and Mario Kart titles.

As well as the three first party games, Nintendo has secured a number of games from third party publishers like EA, Ubisoft, and Konami. The list includes:

Nintendo said that there would be a "steady and diverse" stream of content for the 3DS, and that around a dozen more games would come out before E3 in June. Nintendo has also confirmed the suggested retail price for 3DS games will be a penny short of forty bucks.

The 3DS launches on March 27th in North America, and March 25th in Europe.