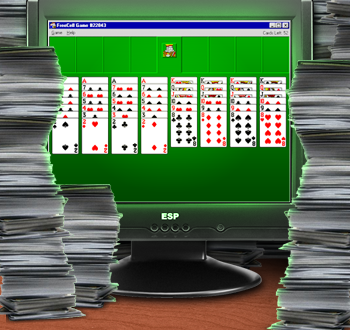 Not everyone wants a game with explosions and guns, some people are happy with just a virtual deck of cards.

A lot of "hardcore" gamers would turn their noses up at FreeCell, one of the single-player card games that comes bundled with Window. But everyone has to start somewhere, even people who don't start playing videogames until their autumn years. In Issue 294 of The Escapist, Chris Plante talks about how FreeCell provided the perfect way for his grandfather, Norb, to spend his retirement, after a lifetime of running his own business.

Norb and Pat were and still are notoriously bad with cell phones, so to create a direct line of communication between Florida and Ohio, my uncles purchased them their first computer: A Dell. "The guy who came and installed it asked me what I liked to do," explained Norb to me in a conversation for this article. "And I told him I loved to play solitaire. And he said, 'Then this is the easiest and best game.'"

That was the day my grandfather discovered FreeCell ... The sense of acquiring skill and, more importantly, winning hooked my grandfather. "I win once in a while," he told me, "that's what I like about it."

FreeCell is, at its core, a game about order ... An expert player is an expert organizer. They know, far in advance, where things fit. The basic gist is like organizing a filing cabinet, managing a bank statement or storing hundreds of reams of paper in a printer's warehouse ... For Norb and FreeCell, there have been good patches and bad, but hard work pays off more often than not. In a game like [i]FreeCell[i], there is always a chance for success if you practice organizing everything, putting things in the right place, leaving room to adjust on the fly.

Norb will play FreeCell for a few hours each day, and dismisses any claims that playing videogames is a bad way for him to spend his time. You can read more in Plante's article, "Grandpa Holds the Cards."