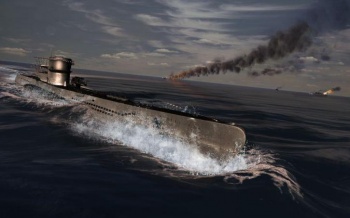 Gabe Newell has revealed that one of Valve's earliest projects was a submarine game, and it might still come out someday.

On a recent episode of the SteamCast, a podcast dedicated to Valve, Gabe Newell was present to talk about the company's earliest projects. Contrary to what you may have thought, after Valve was founded the studio didn't sit right down and start making Half-Life.

One game Valve envisioned before Half-Life was called Prospero, which was said to be a Myst-inspired action-adventure game where the player used psionic powers. Unbeknownst to many, Valve also worked on a game even before Prospero, and it involved a submarine.

"Even further back than Prospero, the other game that Mike [Harrington] and I were talking about before we'd even had anybody other than us working on it was a submarine game," Newell said. "Mike was absolutely certain there was an opportunity to create fantastic underwater visuals and gameplay, so if people want to know the even furtherest back thing we have haven't gotten around to shipping yet it would have to be the unnamed submarine game."

Newell didn't offer any other details, but added that Valve never really cancels projects, it only shelves them for a potential revisit in the future. "It's just a question how long until we get around to doing it," he said of both Prospero and the submarine game. I wonder if that also applies to Valve's cancelled fairy RPG.

There have been some great submarine simulations released over the years, but nothing that's hit the mainstream like Valve's titles tend to. Valve has the sort of reputation where gamers will dive in to anything it releases, so even though it sounds like a major departure for the studio, if Valve wants to release a submarine game let's see what it can do.

Escapist Podcast - Science and Tech: 018: Is Internet Censorship Ever Good? Is Our Universe a Lie? Plus Supersonic Subs The Escapist Staff 1 Comment
Comments on