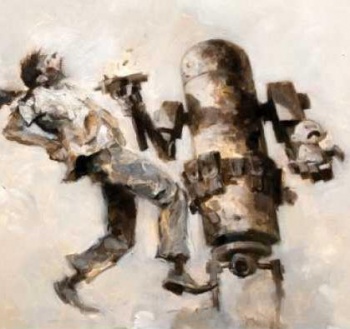 Zombies and robots will finally discover who's best on the big screen, thanks in part to Michael Bay.

Ashley Wood and Chris Ryall's IDW comic book series Zombies vs. Robots pits the two classic foes against each other in a battle to protect humanity. That battle is now becoming a feature film with Michael Bay as a producer.

Bay is most recently known for his work on the latest Transformers movies, so he has plenty of experience with robots. He's also produced horror films like the Nightmare on Elm Street remake, giving him a leg up on dealing with the creepiness of creatures like zombies.

Zombies vs. Robots follows a world devastated by the zombie apocalypse where a group of robots must protect the last remaining human. It really has a pretty appropriate title.

Like the book, the movie will focus on a young girl who is the last human alive. The zombies in the film will be "intelligent and evolved" according to Deadline, with a group of robots the girl's only defense. The director doesn't appear to have been named, but Bay is definitely one of multiple producers on the project.

No matter how you feel about Bay, I don't think this is a property that can be mishandled. Unless they also try to throw some ninjas, monkeys, and pirates in there. That'd just be too much.