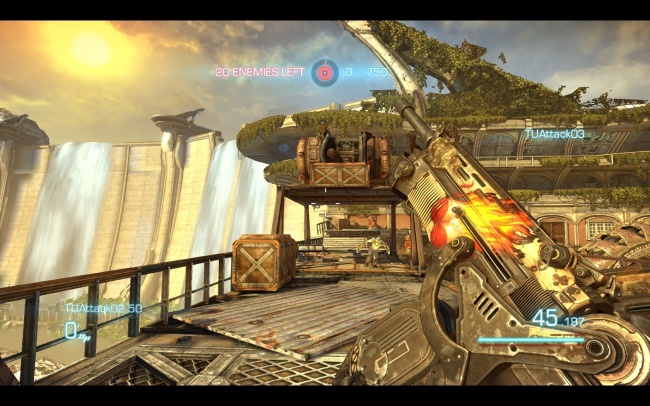 People Can Fly shows Yahtzee a little love with a very special shout out in Bulletstorm.

Despite the fact that he bashes pretty much every game he gets his hands on, our own Yahtzee has a wee bit of pull in the gaming community. Perhaps that's because developers recognize that beneath his crusty and malicious exterior beats the heart of a true lover of games - or perhaps it's just because they share his fascination with Branston Pickle. Then again, for Bulletstorm developer People Can Fly, it might have something to do with his influence on the buying public. His legendary review of the company's earlier title Painkiller, in which he theorizes that the only way the gun that shoots shurikens and lightning could be more awesome was "if it had tits and was on fire" increased Amazon sales of the game by a staggering 7403 percent. (Nope, not a typo.)

People Can Fly wanted to show Yahtzee some appreciation and figured there was really no better way than by making one of Bulletstorm's guns even more awesome. The result, which you see pictured above, is an unlockable skin that bedecks the PMC with, what else? Tits and fire. (Yes, this is for real.)

Reacting to People Can Fly's homage to Mr. Croshaw, Mike Capps, president of Bulletstorm co-developer Epic Games, said, "Clearly we are striving to be better than even ourselves."