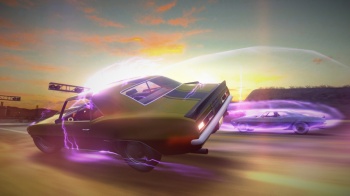 Sequels and prequels made millions last year, but anyone launching a new IP had a rough time.

Former Bizarre Creations design manager, Gareth Wilson, thinks that it wasn't one, singular reason that led to Activision's decision to close the studio. Instead, he thinks that there was a "perfect storm" of events that came together in such a way that the studio had very little chance of survival.

Wilson said that the problem wasn't just that Bizarre's new racing game, Blur, didn't sell very well. He said that a lot of the year's other new IPs - games like Alan Wake, Enslaved and Vanquish - didn't sell particularly well either, despite favorable critical receptions. On the other hand, titles like Halo: Reach and the Call of Duty games were making money hand over fist, which made investing in new IPs seem like a bad idea.

Wilson thought that it was getting harder to get games noticed, and said that Blur's release date, which was right around the same time as Red Dead Redemption didn't do much to help. He felt that it was getting harder and harder to get to that "middle ground" of 2 -3 million sales, and that most games either "broke out," selling 4 million copies or more, or struggled to break even.

He wasn't angry about the closure of the studio however, saying that the process had been so drawn out that he had time to come to terms with it. He said that it was never a secret that the studio could be sold or closed and that Activision let people go for interviews for new jobs while it searched for a buyer. Wilson has now moved on to Sumo Digital, whose recent work includes the BBC's Doctor Who adventure games, although he couldn't really talk about what he was working on.

Whether you agree with Wilson's assessment of Bizarre's fate or not, it's hard to argue with the fact that 2010 was largely a year of underperforming new IPs. It would have been interesting to see if the game would have sold better if it had come out at a different time, as Wilson suggested might be the case, or whether it still would have struggled to find an audience. Of course, that's really just academic now, as the studio has shut up shop for good.