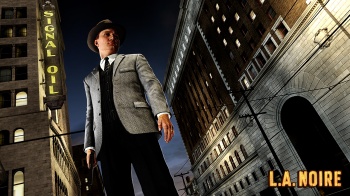 Rockstar Games has announced a plethora of pre-order bonuses for the upcoming L.A. Noire, which include new outfits, cases to solve, weapons, and more. There's just one catch: They've been divided up between multiple retail outlets.

Pre-ordering from Best Buy or Amazon awards purchasers with an exclusive suit and pistol, though only the suits are described. Best Buy is offering the "Sharpshooter Suit," which enhances your aim with pistols and rifles. Amazon offers the "Broderick Suit," which strengthens hand-to-hand combat abilities and resistance to damage.

Rockstar gave Walmart a bonus case for pre-orderers to solve called "A Slip of the Tongue." This traffic desk case looks like a standard car theft on the surface, but ends up leading to an investigation on the biggest auto fraud ring Los Angeles has ever known.

Meanwhile, GameStop appears to have gotten the best of the bunch, with an exclusive case and a side-mission. "The Naked City" is a vice desk case that has players look into the apparent suicide of a beautiful fashion model. Hint: It probably wasn't a suicide. GameStop pre-orders also receive a mission called "Badge Pursuit" which deposits 20 badges around the city for players to find. Collecting them awards extra experience points to build your investigative skills, and unlocks a suit that gives extra ammunition.

Pre-ordering from the Rockstar Games Store will provide buyers with a t-shirt. No offense Rockstar, but I don't think anyone is choosing that one. Target buyers also get a t-shirt, and a $5 gift card.

There's nothing wrong with pre-order incentives, but I can't help but think that this is the improper way to offer them. "Badge Pursuit" alone seems like a pretty typical Rockstar mission that should be included in every L.A. Noire player's game. If all of the content can eventually be unlocked by everyone, great. If not, I question how exclusive pre-order bonuses are beneficial, especially when one retailer's is so much better than the others.