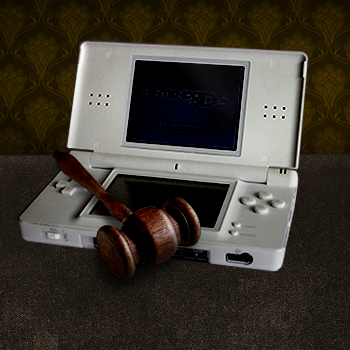 Anyone who's played the Phoenix Wright games will know that they're not the most accurate depiction of what goes on inside a courtroom. All the same, they can still be rather compelling, in spite of - or maybe because of - their silly plots and bizarre logic. In Issue 294, Brendan Main talks about how Phoenix Wright was even able to win over his dad - a federal judge who thought that videogames were a waste of time - albeit with a lot of grumbling and complaining along the way.

Every time I talked to him about Phoenix Wright, he groused about this or that case, and the latest indignities he'd suffered in grinding through "that godawful game." There was the direct implication that this waste-of-time game was wasting his time, and that somehow I'd forced him to suffer through it. As if I'd forced his hand, somehow, with this cursed gift ... I played dumb, and listened to his trials and tribulations with this or that case. The one with the bloody statue. The one with the steel samurai. The one where you cross-examine a parrot.

Interestingly, almost all of his complaints were procedural. Why would Wright only take on innocent defendants, if it's his duty to do his job regardless or innocence or guilt? Why does he get away with badgering pretty much any witness he comes across, when the Judge could instantly put a stop to it with a bang of his gavel? Dad levels no metaphysical complaints ... I took this as a good sign - that, for all its supposed godawfulness, on some level, he had bought into Phoenix Wright's strange little world.

Because for all his continued protestations, I began to notice something. In his accounts of how bad the game truly is, it was always new stories, and new cases. He was making steady progress, despite himself. And one day, using his computer to check my email, I quickly flipped through his open tabs, and saw a different sort of "evidence" - page after page of FAQs and walkthroughs. He had bookmarked them all, and had been consulting them, case by case, making sure to scavenge every last piece of evidence, making sure that his witnesses were examined just right.

Phoenix Wright was a way for Main to share what he did - writing about videogames on the internet - with his father, although it took him a while to realize that's what he was doing. You can read more about it in his article, "My Dad vs. Phoenix Wright."

Go Out and Play Chimaera 13 Comments