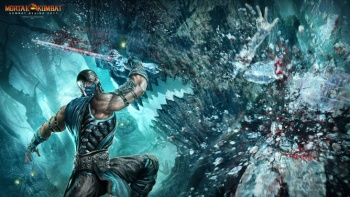 Brace yourselves for a shock: Mortal Kombat has been refused classification in Australia.

That the spinning top of randomness that is the Australian videogame classification system has claimed the latest iteration of one of the oldest and most famous fighting games in videogame history is only surprising because of the fact that every other title in the Mortal Kombat franchise has been given the green light. But the 2011 reboot apparently crosses some line, somewhere, and thus finds itself out of the club.

"The highly anticipated video game Mortal Kombat, published by Warner Bros. Interactive Entertainment (WBIE) in Australia, has been refused classification by the Australian Classification Board and will not release in Australia," WBIE said in a statement. "We are extremely disappointed that Mortal Kombat, one of the world's oldest and most successful video games franchises, will not be available to mature Australian gamers."

"WBIE would not market mature content where it is not appropriate for the audience," it continued. "We understand that not all content is for every audience, but there is an audience for mature gaming content and it would make more sense to have the R18+ classification in Australia. As a member of the iGEA, WBIE is reviewing all options available at this time."

"Reviewing all options" usually translates into "cutting it to ribbons" but WBIE's statement seems to rule out that possibility. Perhaps it's waiting for the SCAG meeting which will follow the SCAG meeting at which the issue of allowing mature-rated games in Australia won't be discussed? Anything is possible, I suppose - except buying Mortal Kombat from an Australian store.

Mortal Kombat comes out on April 19 for the Xbox 360 and PlayStation 3.