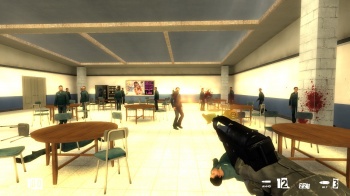 Checkerboarded Studios set out to make a game in which you shoot schoolchildren for fun and succeeded only in offending everyone.

When I first heard about School Shooter: North American Tour 2012, I was appalled. Why would any sane person make a game that so clearly crossed the line from healthy entertainment into psychosis? I reached out to one of the developers - known only as Pawnstick - who is busy putting the finishing touches on the mod that uses Valve's Half-Life 2 code to portray events that are eerily similar to Columbine and Virginia Tech. Pawnstick was surprisingly articulate, but his responses confirm that School Shooter: North American Tour 2012 is not only morally reprehensible but also dangerous for the game industry as a whole.

In the game, you play a disgruntled student who decides to start shooting and killing students, teachers and even janitors in a school setting. You rack up points for the amount of people that you kill before you are overwhelmed by police and SWAT teams sent to take you down. As your time on the level ends, you are given the option of killing yourself to end the session. Then you can just fire it up again to try to get more points - by killing as many innocent people as you can.

I don't need to tell you that the entire concept of School Shooter: North American Tour 2012 is horrible. While many of us might indulge in a little murder while playing shooters - civilians in a Russian airport or townsfolk in Red Dead Redemption - a whole game based on killing children, teachers and janitors in a school crosses all kinds of lines that it's impossible to argue in its favor. School shootings like Columbine are a national tragedy because it underlines fundamental problems in our society, while mistakenly pointing to media like movies and games as the cause. Pawnstick's mod, while being disgusting in its own right, will do nothing but give ammunition to anti-game activists, joining the ranks of Postal 2 and Manhunt as examples of gaming's moral depravity. Instead of pushing the game industry forward into new and fantastic ways of telling stories, School Shooter: North American Tour 2012 is a huge step back into gaming's flawed adolescence.

Read on to hear from the man behind School Shooter: North American Tour 2012.

Why are you making a game where you shoot kids in a school? What was your inspiration?

Some of my ideas stemmed from the fact that nobody has ever tried to create a proper game about a school shooting. Which is to say, something intended to be "entertainment," rather than going for pure shock value or thought-provocation. When you get over how supposedly shocking something like Super Columbine Massacre RPG is, the game itself is fucking boring. If you check the website, you're treated to a ton of lengthy essays by the guy who made the game; about how it was never even his intent to make it fun.

The most direct inspiration though came from another Source mod, called Bully: Source. It's this laughably bad little game which tries to teach kids how to deal with bullies at school. The problem is, the game is totally broken, and you can't even finish the damn thing because the final "multiple choice question" prompt in the game doesn't even respond to any input! It made me realize that games which try to convey some larger message - or which specifically try to "educate the player" - are almost always fucking garbage. That's why we're working like dogs on this game, in order to make sure this game doesn't suck as much as the last couple of school shooting games.

SS:NAT2012 isn't about why school shootings occur. It's not about the impact they have on the families of the victims. It's just a game, and I'm just a developer: It's not my place to try and teach the world to love again, or to cure society's ills. The purpose of video games is to be fun, and to provide players with scenarios they can't (Or shouldn't) re-enact in real life.

The maps and weapons are based on real-world school shootings. How accurate are they? What kind of research did you do to ensure that accuracy?

To be honest, most of the research consisted of simply Googling the shooters and their weapons. A Columbine Site helped us out with some of the weapons from the Columbine shootings. The maps, however, aren't actually based on any school in particular. The maps are all designed with gameplay in mind. If any of the maps end up accidentally matching the dimensions of some real-life school, it will be by total coincidence.

How did you feel when you personally heard about Columbine or the Virginia Tech shootings?

I think the media tried to cover it in a way that made the events more dramatic than they actually were. Even in my younger age, I saw right through most of it. The way the news victimized the victims and overplayed the evil of the shooters disgusted me more than the actual shootings themselves. The fact of the matter is, I never knew any of the victims, or anybody else who attended the schools. It affected me as much as hearing about the quakes in Haiti. Which is to say, not very much at all.