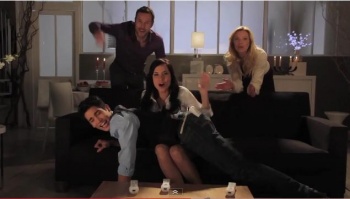 Sorry North America, you won't be spanking each other with a Wii Remote shoved down your pants on Ubisoft's dime.

When the commercial for We Dare was first revealed, it got a reaction that Ubisoft probably didn't expect. Now, Ubisoft has confirmed that We Dare will never come to markets other than Europe and Australia, and it's trying to hide the game's trailer.

The We Dare commercial baffled much of the gaming media, and the trailer was dubbed over with the soundtracks of anything from the Dead Island teaser to Inception. Ubisoft has started to block instances of the commercial on copyright grounds in regions such as the U.S. in an apparent attempt to quell the practice.

Ubisoft also told IGN that We Dare would "absolutely not see release in the United States." Notably, this statement isn't as vague as the oft-given: "There are no plans at this time."

The cultural divide between Europe and the U.S. might be too large to survive the PR storm that could surround We Dare. It's too bad, because I really wanted to lick a Wii Remote saucily and have it matter in a game.