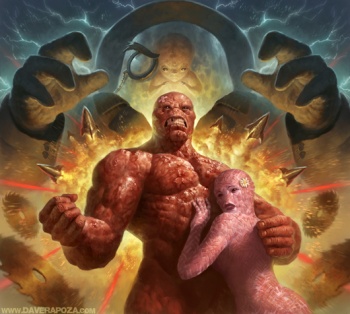 Despite being a timed exclusive for the Xbox 360, the PC version of the hit indie platformer Super Meat Boy actually outsold its console cousin.

Team Meat, the studio behind Super Meat Boy, didn't have a very pleasant experience launching its game as a timed exclusive on the Xbox Live Arcade. Speaking at the Game Developers Conference last night, co-CEO Tommy Refenes said Microsoft made a lot of promises in exchange for a 30-day window of exclusivity to the game, including having the XBLA launch week all to itself when the game came out. But when the big day arrived, the team discovered that Microsoft had added Double Fine's Costume Quest to the launch schedule at the last minute.

Not only that, but the game didn't get the promised top billing in the Spotlight feed on the 360 dashboard, either. In fact, it wasn't anywhere in the feed at all.

"I was like 'What's the deal? Are you guys pulling out? Where's our stuff?'," Refenes said, describing an email he sent to the game's producer at Microsoft. "It finally went up half way through our launch day. It was the number four spot; it wasn't number one. The 'Spooktacular Sale', which was a whole bunch of other games that already came out - that was the number one slot."

"An ad for a Mazda 3 was the number two slot - because you all go on Xbox to figure out what car you want, right?" he continued. "We were number four and we stayed number four the entire week."

Microsoft apparently told the studio that the better the game performed, the more it would be pushed. But in spite of strong reviews and sales that handily surpassed other titles, nothing else happened. "We just kind of got pushed to the side, and that's basically how the Xbox Live launch went," Refenes said. "The only reason the game sold well was because of how we promoted it. The help from Microsoft was there in a very limited capacity."

It's impossible to measure the true impact of that neglect but one statistic is rather telling. Team Meat revealed on Twitter that the PC version of Super Meat Boy actually outsold the XBLA release by a ratio of 55:45, maybe not a huge difference but certainly substantial, especially when you recall that the XBLA edition had a full month head-start on the PC. Even with Super Meat Boy going for only $3.75 during the 2010 Steam Holiday Sale, the studio claimed it made more on Steam that it did on XBLA; and while the sale price was bound to inflate unit sales, the game actually made as much on Steam in the two weeks prior to the sale as it did during its entire run to that point on XBLA.

What's the lesson? Maybe Microsoft completely dropped the ball, or maybe there's some validity to the idea that the PC is the "natural" home for indie developers. Whatever the situation, it's hard to deny that at the very least it's evidence of the continued relevance of the PC as a gaming platform. And the gap between PC and XBLA could grow even greater next month, as the boxed Super Meat Boy Ultra Edition, featuring unreleased artwork, a behind-the-scenes look at the game, a soundtrack and more, finally hits retail.