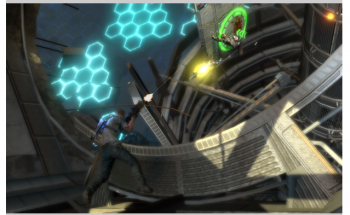 The producer of the upcoming third-person shooter Inversion says that instead of using so-called "online passes" to combat used game sales and piracy, publishers should just make sure their games are worth 60 bucks when they hit the market.

You're probably familiar with the concept of the "online pass" but for those who have somehow managed to miss it, it's a generic name for the single-use codes that publishers use to add extra content like quests and characters, or access to features like online gameplay, to brand-new copies of games. If you buy the game new, you get the content at no charge; if you buy used, on the other hand, you have to pay extra for it. The idea is to help publishers recover some of the revenue they lose when people pick up pre-owned copies of games.

But Rick White of Saber Interactive, the studio currently working on Inversion, thinks that's the wrong way to go. He doesn't deny that used game sales are a problem for publishers, but says the challenge is to find ways to encourage gamers to buy new rather than punishing them for buying used.

"One thing we need to commit to as gamers and developers is to make you want to own our game because there's a lot of content, make you want to own it because you can play with your friends by playing co-op and playing multiplayer," he continued. "Make it $60 worth. Make your game truly worth the $60 and make it good. Put your love and passion into it and people are going to want to own your game. I mean, do people really rent Call of Duty?"

It's a good idea but a tough sell. A game longer than eight hours is as likely to be seen as an overly-demanding time sink these days as it is a good value for the price, and the online arena is so utterly dominated by a handful of titles that often it hardly seems worth the effort to even try. I love the idea of new games consistently being worth the full price of admission but realistically, I just don't see it happening.

Inversion, by the way, is slated to come out in February 2012 for the Xbox 360 and PlayStation 3.