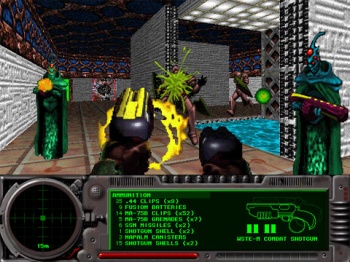 Commenting on recent rumors, Bungie reveals it is working on an MMO, but it won't be "WoW in space."

At the Game Developers Conference, Bungie's Lead Network Engineer David Aldridge confirmed the rumors that Bungie is currently working on making an MMO, but denied the rumors that it will be "WoW in space." There was no comment on several other rumors, such as it being an "MMO FPS" or being titled Destiny, but it was confirmed that the game will not be Halo-related.

I suppose it was only a matter of time before this announcement was made. Last year at GDC, another Bungie Rep, Joseph Staten, responded to a question with another question: "Wouldn't it be great if we could make a world that was always there for you?" Apparently, Bungie thinks it would most certainly be great.

While no additional details have surfaced, I wouldn't be at all surprised if the new game has some sci-fi elements, as a laid-off contractor might cynically refer to any sci-fi MMO the people who laid him off are making as "WoW in space," while the people making said game would vehemently deny it was anything of the sort. It would also groove with the fact that Bungie's most successful games, the Marathon and Halo franchises, were both science fiction themed.

While I hate to throw the phrase around, if anyone might be able to make a "WoW killer", it would probably be Bungie.