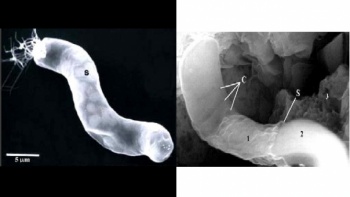 One of the most important questions in human history - are we alone? - may at last have a definitive answer.

It isn't the Vulcans. It isn't E.T. Hell, it isn't even Alf. But a NASA scientist claims to have found definitive proof that life in the universe can - and does - exist outside of Earth: fossils of alien bacteria discovered in meteorites.

Dr. Richard B. Hoover, an astrobiologist at NASA's Marshall Space Flight Center, published his findings in Friday night's edition of the Journal of Cosmology, a peer-reviewed scientific journal with a website that looks like it came straight out of 1999. Hoover discovered the fossils in an extremely rare type of meteorite called CI1 carbonaceous chondrites, of which a mere nine specimens exist here on this blue planet.

"I interpret it as indicating that life is more broadly distributed than restricted strictly to the planet Earth," Hoover told Fox News in an interview, which is a strikingly anticlimactic way of essentially trying to say "we are not alone." According to Hoover, who has studied meteorites for a decade, many scientists ignored this field of research because they didn't believe they'd find anything there. "This field of study has just barely been touched - because quite frankly, a great many scientists would say that this is impossible."

He, however, says he did - by breaking apart the uber-rare space rock and analyzing its insides with an electron microscope that helped him discover the fossils in question. Many of the micro-organisms in the fossils resemble life on Earth, said Hoover, but others? Not so much. "There are some that are just very strange and don't look like anything that I've been able to identify, and I've shown them to many other experts that have also come up stump."

According to Journal of Cosmology editor-in-chief Dr. Rudy Schild, a scientist at the Harvard-Smithsonian Center for Astrophysics, the publication invited thousands of scientists to cross-examine and scrutinize Hoover's report to try and head off skeptics and naysayers. "No other paper in the history of science has undergone such a thorough vetting, and never before in the history of science has the scientific community been given the opportunity to critically analyze an important research paper before it is published."

Not everyone is convinced, of course. Dr. David Marais, an astrobiologist at NASA's AMES Research Center, says that similar claims have been made before and proven wrong - and that a discovery of this magnitude will need solid evidence rather than conjecture. "It's an extraordinary claim, and thus I'll need extraordinary evidence," Marais said. Until the claims could be independently verified, said Marais, this was merely a "potential signature of life." Which is still pretty huge, if you ask me. But then again, I'm not a scientist.

If true, however, the implications could be staggering beyond the simple revelation that life exists elsewhere in the cosmos, of course. "Maybe life was seeded on earth -- it developed on comets for example, and just landed here when these things were hitting the very early Earth," speculated SETI Institute senior astronomer Dr. Seth Shostak.

"It would suggest, well, life didn't really begin on the Earth, it began as the solar system was forming."

Or maybe life was intentionally seeded here as part of a grand scheme by the Forerunners as they built their installations to contain the threat of the Flood, and -- no, wait, that's Halo.

Either way, this is some pretty heavy stuff. It could be a false alarm, but if this is our first real hint that we are not alone in the universe? Holy crap.

Update: University of Minnesota professor PZ Myers has taken a pretty savage scalpel to this claim, and he makes a pretty convincing argument that this is absolute bunk. While the Fox Mulders of the world can still hold out hope, the Scullys may be in the right on this one. Alas.