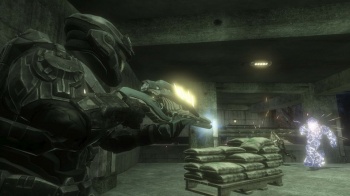 A report that said Bungie had confirmed it was working on an MMO was apparently the misinterpretation of a joke.

While it was thought that Bungie had confirmed its current project as an action-based MMO, this confirmation has now been unconfirmed. Bungie says its recent comments at GDC 2011 were only a joke.

In a GDC panel, Bungie lead network engineer David Aldridge made mention of a "massively good online game" and reportedly said it wouldn't be "World of Warcraft in space." This was interpreted as a confirmation of a future Bungie MMO.

On Bungie.net, Bungie says that Aldridge was playing off of rumors and didn't actually confirm anything. A post on the site reads: "In rehearsal Aldridge was convinced that everybody got the joke. It was all in the delivery, he assured us, and he was certain it was clear that he was playfully riffing off of the recent rumors."

This could be a double misdirection, or Bungie might just not be working on an MMO. You'd think if Bungie actually was, it would make sure that everybody knew to keep it under wraps, even joke-wise, until the official unveil. We'll find out the truth, eventually.