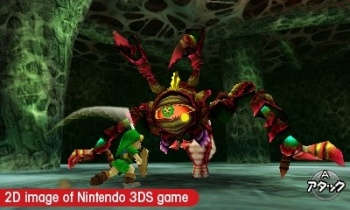 Legend of Zelda: Ocarina of Time 3D will include the challenging master quest not found in the original version.

When Nintendo first started talking about Legend of Zelda: Ocarina of Time 3D, it wouldn't confirm if any new content was being added to the classic N64 version. At GDC 2011, Conservative New Media talked to Nintendo assistant PR manager David Young and got him to reveal that the game will feature the inclusion of Ocarina of Time's master quest.

For Zelda fans that never got their hands on the elusive master quest compilation, Ocarina of Time 3D could be the perfect chance to try it out. Young didn't reveal if players would have to unlock it or if it'll be available right from the start.

Ocarina of Time 3D also features improved visuals and menus that are always at the ready on the touchscreen, allowing easy access to items and potions. Nintendo hasn't announced a release date for Ocarina of Time 3D, but says it's definitely coming out in 2011.