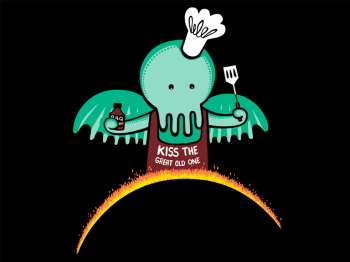 H.P. Lovecraft's Great Old Ones have appeared in independent movies, tabletop RPGs, board games, and videogames, but it's been a while since they've appeared in a major Hollywood picture. Until now, that is. Guillermo del Toro's been attached to a film adaptation of At the Mountains of Madness for a while. Now, it sounds like the movie is definitely going to be made, with filming supposedly starting this June.

io9 spoke with the movie's producer Don Murphy (James Cameron is also a producer on the project), who confirmed the movie's start date and also revealed who its star is going to be. Murphy explained that the film is "supposed to shoot in June" and that Tom Cruise will be starring in it, which confirmed recent rumors. Ron Perlman also confirmed his presence in the film to io9, which -let's be honest about this- is surprising to no one since it's a Guillermo del Toro film.

While this is really exciting news, insiders spoke to io9 shortly after the original story ran and said that neither the start date nor Cruise's presence have yet to be confirmed. Shortly after that, Murphy retracted his statements.

If you haven't read At the Mountains of Madness, here's a quick summary:

A complete short novel, AT THE MOUNTAINS OF MADNESS is a tale of terror unilke any other. The Barren, windswept interior of the Antarctic plateau was lifeless-or so the expedition from Miskatonic University thought. Then they found the strange fossils of unheard-of creatures...and the carved stones tens of millions of years old...and, finally, the mind-blasting terror of the City of the Old Ones.

If there's a director who seems capable of putting H.P. Lovecraft's eldritch horror into movie theaters, it's definitely del Toro. The first Hellboy film does a nice job of showing what things might be like, thanks to the on-screen appearance of the Ogdru Jahad, and Pan's Labyrynth showcased how well the man can blend everyday settings with horror sequences that are simultaneously beautiful and terrifying. Hopefully, the rumors come true.