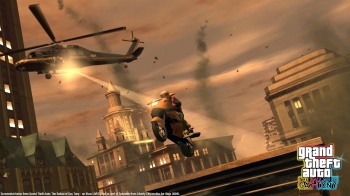 A set of casting calls suggest a codename and possible setting for Grand Theft Auto V.

Internet investigations have revealed what could be hints toward a future Grand Theft Auto title. The Superannuation twitter account has uncovered a list of acting calls made by Rockstar Games' casting company that seriously sound like characters from the GTA series, in addition to a potential codename.

Further, regular Rockstar casting firm Telsey + Company has been searching for actors to fill roles in a project called Rush, and they'd all mesh perfectly with the Grand Theft Auto universe. Some of the descriptions call for an "somewhat incompetent Chinese mobster" that loves doing ecstasy and going to raves, a "neurotic soccer mom" that is anxious and addled on pain killers, a "Weed evangelist" who is now a leading proponent of marijuana's fantastic properties, a "FPS playing gamer son" that is "into making racist comments while playing online," and an "Armenian car dealer, moneylender, would be Fagin and would be bully" that is heavily connected to the underworld.

If these aren't characters from Grand Theft Auto, Take-Two must have something else very similar in the works, which is unlikely. The listings would put Grand Theft Auto V in a fairly modern setting, what with the FPS player that talks trash online.

Analysts expect the announcement of a new Grand Theft Auto game within a year, but Rockstar and Take-Two have made no mention of Grand Theft Auto V whatsoever. E3 2011, coming up this summer, seems like the perfect place to announce such a title.