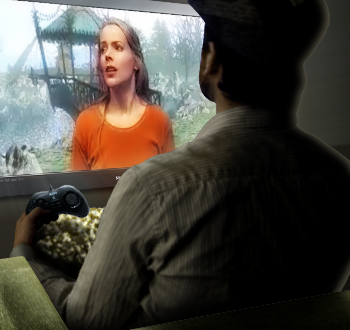 It had high production values and came on a stack of CDs, but Sierra's Phantasmagoria just wasn't scary.

If you watch a lot of horror movies, you've probably noticed that the characters tend to be a little, well, stupid. What's more, you've probably thought to yourself that if an axe-wielding psychopath was chasing you, you'd be able to avoid getting chopped up into small pieces with ease. In Issue 296 of The Escapist, Brendan Main looks back at Phantasmagoria, a 1995 point and click adventure which was supposed to allow players to take on the lead role in a horror movie, but ended up missing the mark by a mile.

Sierra's Phantasmagoria promised to be a technological turning point that changed the way we experienced horror media. There would be no more impotent shouting from the balcony - from here on, we would be making the decisions.

Sierra On-Line envisioned Phantasmagoria as a horror movie that you played, and its sheer scale reflected those aspirations. The game's script came in at 550 pages, more than four times the size of a traditional movie script, with another 100 pages of storyboards, representing 800 scenes in all. Sierra hired actors to perform entire scenes, which were filmed over four months using a crew of over 200, and even included a Gregorian choir of 135 in the production. The finished game itself was massive, shipping in seven CDs on the computer, and eight for the Sega Saturn.

But reality is a funny thing, and harder to capture than you might imagine. In [i]Phantasmagoria's[/i, case, the combination of the realism of live-action film with the graphical abstraction of mid-nineties PC gaming was a complicated marriage. Though the character of Adrienne was portrayed by a real person, the environments she navigated, ranging from the haunted house itself to the surrounding grounds, were ordinary, pixilated fare. The juxtaposition was odd and unflattering. Rather than Adrienne's physical presence lending these environments a type of realist cred, it often tended towards the opposite, drawing attention to how unreal the backgrounds really were.

Despite its best efforts, Phantasmagoria never really managed to be scary, and time hasn't done it any favors. You can read more about it in Main's article, "House of Horrors."