Which characters go beyond the boobs?

Update: The guys over at Nerd Calibur were awesome enough to record video of the "Females on Female Characters" panel. For those of you who weren't able to attend PAX East 2011 - or those who want to watch it again - you can catch all the hilarity and frank discussion of female characters in the following three videos. Share and Enjoy!

Many thanks to Nerd Calibur for posting these videos. 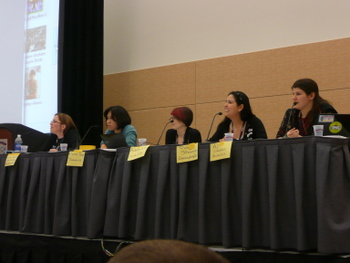 At PAX East 2011, The Escapist's own Susan Arendt led a panel of prominent female gamers to discuss which women characters in games transcend the stereotype of merely being an object of male desire. Journalists A.J. Glasser and Tracey John, Loading Ready Run's Kathleen DeVere and Trina Schwimmer, founder of GamingAngels.com, went through the various characters that they hold as the ideal portrayal of women, as well as the ones that just fell flat, or well-endowed, as the case may be. The panel concluded that writing decent characters of either gender is a significant challenge, but that game developers should continue to focus on creating female characters that portray more than one dimension instead of just "hot." It must also be said that hot isn't always bad either.

"There are some common misconceptions about how female gamers feel about female characters and the first one is that we hate sexiness," Susan Arendt said. "[We don't feel] that if there is a character that is physically attractive - that if she is sexy - then that is automatically sexist."

A.J. Glasser responded that many women she speaks to will complain about a character's breast size first. "Can't I just hate her to hate her? Why do I have to hate her because she's pretty?" she asked rhetorically. The panel agreed that many of the problems that they had with female portrayals in games was inadequacies in game mechanics rather than merely taking offense at the presentation. Fighting games such as the first Soul Calibur did a decent job of having female characters that could be judged on their relative merits - Ivy was difficult to master, but then became eye candy in the sequels - but the Dead or Alive "jiggle" had to be mentioned.

The panel discussed many female characters that just didn't go beyond the stereotype. Much of the cast of Final Fantasy XIII failed because they were written poorly - the main character Lightning in particular, but also Fang because she was originally written as a male character before her gender was switched midway through development. "That makes so much sense," Kathleen DeVere said when she discovered the switch. "She's a cardboard character. This person is gruff and tough. There's nothing in there that makes her male or female."

A second misconception is that female gamers want all female characters to be as tough as the males. "We just want well-developed characters," Arendt said. Ripley from the Aliens series of movies is a great example of a complex female character, because she acts strongly when her children are threatened without losing her femininity, but even a overtly sexual character like Bayonetta has promise.

Tracey John wasn't sure that Bayonetta was empowering for female gamers, to which Susan Arendt responded, "I think what makes Bayonetta appealing is that she very much owns her sexuality. She's hot, but she ain't hot for you." Bayonetta exists in a world where sex is normal, but that doesn't mean she does it for your approval.

While it is refreshing to have a character that is comfortable with her sexuality, it's important to realize that is only one facet of the human experience. "How many of you spend any amount of time thinking about whether you are sexy when you're playing a game?" AJ Glasser asked.

As a writer, I couldn't agree more, but I think that panels like "Females on Female Characters" will empower both the gaming audience and developers to pay attention to crafting well-rounded and authentic female characters. If the packed room of over three hundred strong and the wonderful response from both males and females in the audience for this panel is any indication, gamers would certainly appreciate it.