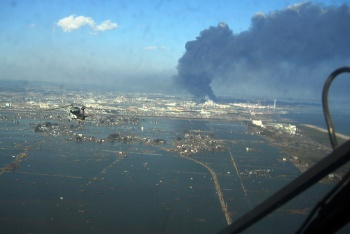 Members of the gaming industry from all over the world are coming together to help in the wake of last week's disastrous earthquake and tsunami in Japan.

In case you've somehow been in a news-less bubble for the past few days, you've probably heard of the devastating Sendai earthquake that rocked Japan on Friday. Between the magnitude 9.0 earthquake and the subsequent tsunami that ravaged the island country's coasts, many expect the death toll to reach into the tens of thousands.

The world has come together to offer aid and disaster relief to Japan, and the gaming industry is no different. Here are just some of the efforts going on to render aid in the wake of the tragedy:

EVE Online developer CCP is taking donations of its in-game time-currency PLEX (it's complicated), which will be converted into real-world money and donated to the Red Cross as part of its PLEX for Good drive. EVE Online players, now's your chance to help.

Naturally, some of the largest Japanese publishers have contributed to home-grown relief efforts as well. Andriasang has a roundup of some of the major ones: Sega Sammy donated 200 million yen ($2.45 million) from its own coffers. Nintendo and Sony Group (not just the gaming division) both donated 300 million yen ($3.67 million) apiece, and Namco Bandai contributed 100 million ($1.22 million).

There are also plenty of charity auctions to be found if you know where to look. Game Informer's Meagan Marie has one of the most appealing: A red original-series Nintendo DS signed by luminaries like the legendary Shigeru Miyamoto, composer Koji Kondo, Zelda director Eiji Aonuma, and more.

Bidding for the fully-functional DS is currently at $215 on eBay, but that number can only go up from here. If you want to own a piece of gaming history and support a truly great cause, that's your chance.

For everyone else, you can go through places like the Red Cross. If you know of cool game-related (or not!) efforts to raise funds for relief in the wake of this tragedy, please feel free to go ahead and list them in the comment thread.