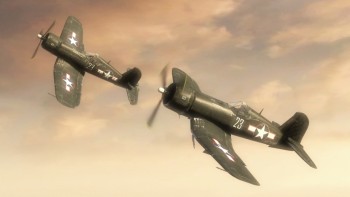 Electronic Arts says Thomas Wetzel's nine-year-old son is too young to play Battlefield 1943 on Xbox Live but it refuses to refund the money Wetzel spent to buy it for him.

Thomas Wetzel likes to play videogames with his young son, so much that he bought the boy his own Xbox 360 so the two could play System Link games together. And when Crackdown 2 was released without System Link support, he bought him his own Xbox Live Gold subscription so they could play that together as well. On weekends, it's Battlefield 1943, which they took turns on until about a month ago, when Wetzel decided to get the youngster his own copy of the game through the Xbox Live Marketplace.

After dropping 15 bucks on 1200 Microsoft Points, downloading the game and struggling through an intensely glitchy online activation process which necessitated a call to EA support, he finally got it running. But when he attempted to accept EA's Terms of Service agreement, he was told he had to be at least 13 years old to play EA games online. And that's when his troubles began; his son's subscription is set to a child's account and as far as EA is concerned, that means that Wetzel the Younger can't play.

He contacted EA to request that either the game be made accessible or that he be given a refund but was told the best the company could offer him was a $20 credit at the EA Store. He declined, because there are no other EA games he's particularly interested in and even if there were, the company's refusal to let his son take part made it irrelevant. Running into a wall with EA, he took his case to Xbox Live Support, but the situation did not improve.

The first Live rep he spoke to assured Wetzel that she would do her best to assist him, whereupon she told him that all Marketplace sales are final and non-refundable and that child accounts are based upon the age of the account owner and cannot be changed to adult access until the owner reaches legal age. A second rep was even less helpful, telling him simply, "The option that you want us to process is not available."

Wetzel acknowledged that some people may have reservations about letting a nine-year-old boy play M-rated games online but pointed out that as the parent, it's his decision to make. More to the point, EA made gave no indication of a minimum age requirement to play the game until after it had taken his money. "There's a standard ESRB rating on the game of T - but those are a guideline to inform parents - not a lawful minimum age to play games online," he wrote. "Halo and Crackdown are both rated M, and I play those with my nine year old all the time; this may not make me the greatest parent ever, but it's harmless fun and he's smart enough to know that what's happening on screen is as real as a Bugs Bunny cartoon."

There's no question that EA is within its rights to set age limits for T and M-rated games but if it's going to do that it should make the situation clear up front, before points are spent or, failing that, it needs to make things right by coming across with a refund. If it had done that in the first place this whole thing would've blown over as annoying and perhaps a bit silly; instead, it's yet another thumb jammed into EA's public relations eye.

Wetzel said he's hopeful that a telephone conversation with another Xbox customer support rep scheduled for tomorrow will yield results but in the meantime he has some advice for parents who enjoy gaming online with their kids. "Don't use your kids' real ages when you create Xbox Live Gold accounts for them, or you'll find yourself with a fine collection of EA games you can't play online," he wrote on LMNOpc.com. "I'm glad Tommy's on a 12-month Xbox Live Gold card and I'm going to double- and triple-check that it's not set to auto-renew because I'm sure as hell not wasting any more money on that."