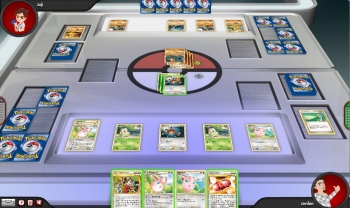 The free-to-play Pokemon Trading Card Game Online should draw in both new players that want to learn and experienced battlers looking for opponents 24/7.

The Pokemon Company International sat down with me at PAX East 2011 to show off the Pokemon Trading Card Game Online experience planned to launch in the first week of April 2011. Even as someone that doesn't play the Pokemon TCG in the real world, it was appealing because of how The Pokemon Company is constructing it for players of all types.

Pokemon: TCGO can be played through any device that runs Flash, i.e. web browsers and the like. The Pokemon Company's goal is to expand the physical Pokemon TCG experience to the digital realm, giving real world players something to do when a human opponent isn't around to battle, while also drawing in new players through an extensive tutorial system that will teach them every aspect of the game. It's looking like the best way to learn to play the Pokemon TCG will be through Pokemon: TCGO, which is free-to-play with three decks if you never want to spend a dime. For those that get into it, new decks purchased in physical retail stores (released quarterly) can be scanned into the game, tying the real and digital worlds of the card game together and eliminating the necessity for consumers to pay for the content twice.

Whether you need a tutorial or not, Pokemon: TCGO will provide the exact same play experience that the TCG offers to physical players. The game's April launch will feature its player vs. computer component, or what The Pokemon Company calls a "game store experience." Players begin by creating their own unique avatar from a huge number of body part choices (eyes, noses, mouths, etc.), along with plenty of different clothing options. If you want to have a goatee, wear a sombrero, and a pair of Kanye West shutter shades, you can. Unlike the Pokemon videogames, the Pokemon TCG takes place in the real world, and Pokemon: TCGO's avatars reflect that.

Once you're all set up, Pokemon: TCGO has players work their way through the ranked virtual opponents of a leaderboard system, each with his/her own personality and AI. Defeating these opponents raises your rank and awards tokens that can be used to purchase more avatar options. Senior director of Pokemon: TCGO Andrew Finch told me that even when players are at the top of the leaderboard, they'll want to keep playing because as with most TCGs, every game is unique. In addition, the game features a big list of achievements to unlock. 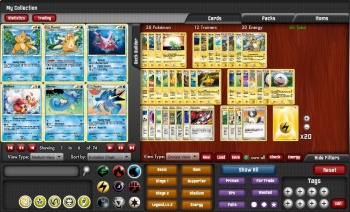 The real meat of the game for hardcore players will be the player vs. player component launching later in 2011. This mode will feature anything from one-on-one battles to scheduled events to larger tournaments generated on the fly that match players up by both skill and style.

To make it easier to jump into PvP, The Pokemon Company has implemented a seriously detailed Deck Wizard. If you don't want to mess with deck building, the game will feature pre-constructed decks built around a particular type of Pokemon and other simple factors. If you want to pick every single card that goes into your deck, you can do that too, and the Deck Wizard allows you to sort cards by every possible factor to make things easier. Some players will spend hours just messing with the Deck Wizard, guaranteed. Finch also told me that trading cards with friends (or foes) will be possible.

Playing a match of the game was very easy, even for a new player like myself, because Pokemon: TCGO guides you at every step along the way. If you're making a choice that might not be the most ideal, the game will double check to make sure that's what you want to do if you're a novice. The interface is very intuitive and battles even feature animations for attacks and other moves, such as jets of flame and water.

Like the creatures Pokemon: TCGO is centered around, Finch says the game will keep evolving after release with new features. A beta test phase is planned to launch the week of March 13-19 (this week) that anyone can play by signing up for the Pokemon Trainer Club here. I never saw myself getting into the physical Pokemon TCG because of factors like cost and the challenge of finding other players, but Pokemon: TCGO eliminates those barriers. From what I was shown, hardcore players should also love it as an extension of their real world experience.