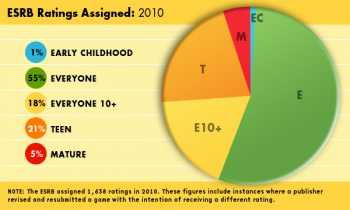 Despite what your parents might think, the ESRB says that a mere 5% of all games released during 2010 were rated "M" for Mature.

It's a constant refrain that you're probably all too familiar with if you play videogames: Oh, videogames are so violent! They're all about shooting helpless people in the face / running people over with cars / beating up prostitutes / all of the above! For many non-gamers, gaming is seen as a thoroughly bloodsoaked hobby.

Yet that view isn't necessarily one supported by facts. According to the ESRB, the industry organization in charge of rating games in the US, it classified a mere 5% of releases as "Mature" in 2010 - about 82 titles out of 1,638. This was the second-smallest category, with EC (Early Childhood) accounting for a mere 1% of releases.

So why do M-rated games get the spotlight?

They tend to sell better than their lower-rated counterparts, for one. Compare this breakdown with the top ten best-selling games of 2010 (in the US, according to NPD):

Ignoring that NPD recently declared Black Ops the best-selling game ever (in the United States), five of the top ten games on this list are rated M, four are rated E, and one is rated E10+. That's massively disproportionate compared to the percentage of M-rated games in the total release schedule.

There may not be more M-rated games, but it sure seems like more people are playing them.