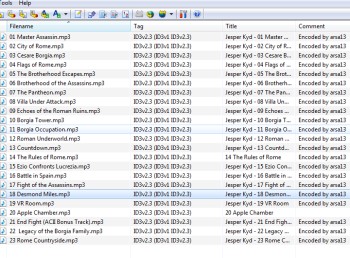 A nasty rumor making the rounds suggests that Ubisoft may have used a pirated version of the Assassin's Creed Brotherhood soundtrack as a bonus in the digital PC release of the game.

You might be wondering how it's possible for a game publisher to pirate a soundtrack it's responsible for creating. The story goes like this: Assassin's Creed Brotherhood came out in November 2010 for the Xbox 360 and PlayStation 3 but the PC edition won't arrive until later in March. As a bonus for being so patient, Ubisoft served up a "digital deluxe" version of the game for preorder at the same price as the regular edition, which included bonuses like a map of Rome, a behind-the-scenes video and a soundtrack.

The bonus files were released today, not long after which a Reddit user noticed something interesting: the ID3 tag comment for each song in the soundtrack reads, "Encoded by arsa13." And who is arsa13? Some Googling revealed him as the fellow who, back in November, uploaded a FLAC version of the Assassin's Creed Brotherhood soundtrack taken from the Xbox 360 version of the game to various torrent sites. A separate Reddit commenter added that it's also "the screen name of someone who's uploaded lots of pirated music to various sites."

So the theory goes like this: instead of taking the time to put together a "proper" soundtrack release for PC gamers, some flunkie at Ubisoft snagged a rip of the 360 version from his local torrent site, converted it to MP3 and turned it loose. And to be clear, it is just a theory at this point, albeit one that looks pretty good based on two facts beyond what's visible in the soundtrack itself.

First, every song in the soundtrack carries the "Encoded by arsa13" comment except one, "Apple Chamber," which according to Wikipedia wasn't present in the CD that accompanied the 360 release of the game but was instead added by Ubisoft for the digital release - which is why it doesn't carry the comment. But perhaps even more damning is that Ubisoft has done something similar in the past. In 2008, Ubisoft "fixed" a DRM issue with Rainbow Six: Vegas 2 by releasing as an official update a no-cd crack created by pirate group Reloaded.

The story, for now, remains a rumor. We've reached out to Ubisoft for clarification but so far the publisher has remained silent on the issue. In the meantime, if anyone else has downloaded the soundtrack and taken the time to check the files, I'd love to hear from you. Where did your copy come from?

Thanks to FrostyCoolSlug for the tip.