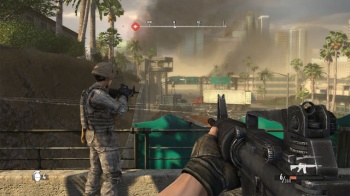 If you don't want to go out to the theater to see Battle: Los Angeles, you can spend even more money to stay at home and have an even shorter experience.

Battle: Los Angeles was released on Friday to some pretty dreadful reviews this past weekend. The tie-in game has also been released to a less-than-stellar reception, though the most-damning accusation is that the shooter isn't even half as long as the movie it's based on.

Kotaku's Mike Fahey recently bought the game on Xbox Live, expecting nothing more than some mindless FPS action. Apparently the game's not even good enough to be enjoyably mindless, as Fahey described it; it's not the worst shooter ever, but it's not good enough to really recommend as a purchase.

However, the biggest disappointment was the game's length:

The game immediately drops you in the boots of a marine fighting against the alien hordes that have invaded Los Angeles. You'll fight your way to a police station, pick up some survivors, escort them out of danger, stumble upon some sort of mother ship, destroy it, and the credits roll.

Now, no one's going to sit there and complain about the fact that this game is bad; after all, bad games are an accepted part of this industry. What's appalling, though, is the fact that this game costs $9.99 on Steam and PSN, or 800 MS Points on Xbox Live. Essentially, gamers are being charged more than a movie ticket costs for an experience that takes less time than watching the film does. Neither Konami nor Saber Interactive should be proud of their involvement with this, and they should know that folks who get ripped off are far less likely to buy their products in the future.