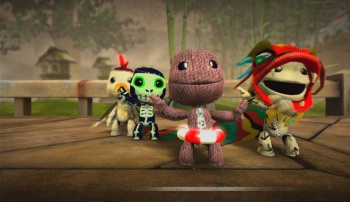 Media Molecule is releasing a pack of LittleBigPlanet 2 levels that are focused on educating children.

Sony evidently has a new initiative in the works that will hopefully see the PlayStation 3 used as a learning tool in schools. The first step in the initiative is Media Molecule's LittleBigPlanet 2 "Teacher Pack," a set of levels designed for educational purposes.

MCV reports that the levels in the pack will feature "instructions for teachers and demonstrations of National Curriculum-based in-game levels that other teachers have made." They'll use the PlayStation Move motion controller to help give a visual representation of subjects within topics such as mathematics.

PlayStation Move can reportedly track distances, calculate speeds, and perform other useful actions. Sony feels these abilities in a physics-based game like LittleBigPlanet can be a boon within the educational world.

SCEE senior VP Ray Maguire called devices like the PS3 and PSP "sophisticated media players" that have the capability to display "video, audio and web-based lessons," and doesn't think they should only be considered videogame consoles. "I think there is a great case for a national Digital Curriculum to complement the existing Curriculum," he added. The "Teacher Pack" is planned for release in May 2011.