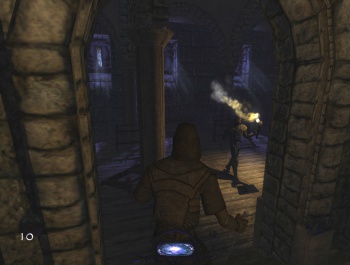 As if Valve needed any more talent, the Half-Life studio has now acquired a designer known for his work on some of the coolest games ever.

Thief. System Shock. Deus Ex. The titles of these classic games alone are enough to spark a huge feeling of excitement in anyone that's ever played them. Now, imagine if a designer that had worked on all of those titles was hired by Valve, the company known for Portal, Left 4 Dead, and Half-Life. Sounds like a match made in heaven, right?

That's exactly what occurred in recent weeks, with Gamasutra discovering that Doug Church is now an employee of Valve. Church has been working as a designer in the videogame industry for decades, having put his hands on the previously mentioned Thief, System Shock, and Deus Ex series, in addition to Ultima Underworld and Freedom Force.

Church's last known move was to EA as executive producer on Steven Spielberg's LMNO, a reportedly ambitious project that never saw the light of day. Valve confirmed that Church has now been with Valve for "a couple weeks."

Valve didn't say what Church would be doing at the company, but when you acquire someone with his skill set you don't exactly put him on a farming simulator or another top-down zombie shooter. Chances are, Church will aid with the creation of something in the vein of his previous projects, or bring his expertise to established Valve franchises. Either way, this is pretty great news.