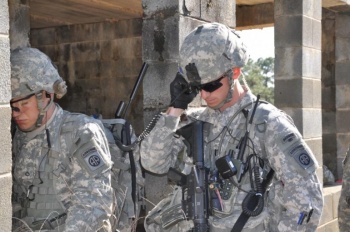 While smartphones may not seem like the scariest item in the Army's arsenal, they're surprisingly effective at coordinating troop movements.

The U.S. Army really seems to be getting behind using smartphones. First, there was the news that iPhones were being used to train missile crews, and now it's been revealed that smartphones are being developed specifically to withstand battlefield conditions with custom apps.

It was recently revealed that U.S. paratroopers with the 82nd Airborne Division engaged in a field exercise at Fort Bragg, North Carolina (about 2 hours down the road from The Escapist's main offices) where they used "ruggedized" Android prototypes and special apps to coordinate their attack on a mock village. The phones were plugged into soldiers' tactical radios, which allowed the devices to act as a crazy conjoined technological mutant.

The phones had two different apps called Joint Battle Command Platform and tactical Ground Reporting (or JBC-P Handheld and TIGR Mobile, respectively). JBC-P displays a battlefield map, complete with GPS positioning of friendly and hostile units and terrain hazards. TIGR, in turn, allows soldiers to send photos and information back and forth to each other.

According to General Peter Chiarelli, Vice Chief of Staff for the Army:

"What I watched with interest today was the ability to take pictures of high-value targets, immediately provide them to the company or to the battalion command post. I saw the ability when a soldier is wounded to take a picture of the wound and to pass that to the doctors, so that medics can make sure that they are treating the soldier in the appropriate way, given the wound that he has received."

OK, honestly, the use of technology sounds pretty cool. What's really cool is the service the phones use: they work with a WIN-T secure terrestrial network created by the soldiers' HMS Manpack and Rifleman radios. That's probably for the best, since if they'd been operating on AT&T's network, I can only imagine bad things happening.