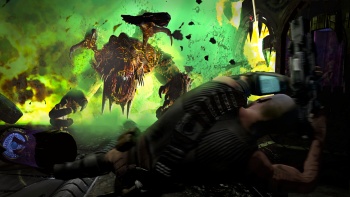 PC versions of Volition games have been rather dodgy affairs in recent years. I didn't take Saints Row 2 for a spin but I did spend some time with Red Faction: Guerrilla and it just wasn't quite fully baked. Volition believes that a lot of those quality issues are a result of the games being ported by external studios and as the saying goes, if you want something done right, you have to do it yourself.

"You should see [the PC version of Red Faction: Armageddon], it looks absolutely beautiful. If you've got a great graphics card it looks fantastic. We definitely believe PC games are great and if they're done right and done well by a studio, they're phenomenal," he continued. "There's a lot of debate and discussion. I can't predict the future, but I'm really happy with how Red Faction: Armageddon looks on PC. It's beautiful."

Barker also said that Volition has a circumspect attitude toward piracy, the notorious PC bugbear that other studios have cited as a reason for stepping back from the platform. "I don't think [piracy] is something at the forefront for us," he said. "First and foremost, we want to make sure we're making a game people would want to pirate. Let's make a game that's worth stealing, and then we'll worry about making sure they don't."

Red Faction: Armageddon comes out on May 31 for the PC, PlayStation 3 and Xbox 360.