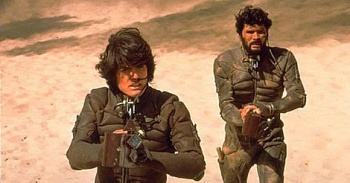 Work on a new Dune movie may have stalled, but some good work came out of it, says the movie's producer.

After four years of development, Paramount has decided to call it quits on a cinematic reboot of the classic sci-fi novel, Dune. Producer Richard P. Rubinstein, who manages the movie rights to the Dune books, says that the split came down to money, but that it had been amicable.

According to Rubinstein, Paramount's option on the property expired, and that he was unable to come to a new agreement with the studio. There was nothing new in the pipeline for the Dune franchise, he said, adding that he was considering his options. Rubinstein liked the script that came out of the collaboration between Pierre Morel and Chase Palmer during the development process, and said that he would re-approach the pair in the future. If Rubinstein does decide to take that script further, Paramount will be able to recoup some of its development costs.

Dune, and its sequels, tells the story of the desert planet Arrakis: the only source of the spice, Melange, and home to the Fremen, a race of desert warriors with blue-in-blue eyes. The spice is vital to interplanetary space travel, but harvesting it is difficult because of the gigantic sandworms that roam Arrakis' sands. As if that wasn't enough, the politics of the Landsraad, and especially the vendetta between the great houses of Atreides and Harkonnen, make Arrakis a very dangerous place to be.

The first book was adapted into a movie in 1984, which starred Kyle MacLachlan, Patrick Stewart, and Sting, and was directed by David Lynch. The movie flopped at the box, but later developed a cult following. Years later, Rubinstein and his production company New Amsterdam developed the first three books into a pair of mini-series in conjunction with SyFy, then still known as the Sci-Fi Channel. These were much closer to the books and were much better received.

Rubinstein, who also worked on the Dawn of the Dead remake and a number of Stephen King properties, said that he knew what he wanted to do with the franchise, and he was on the lookout for someone who agreed with his vision and had enough cash to make the movie that the franchise deserved.