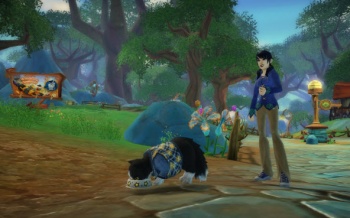 Sony's kid-friendly MMO leaps from the PC to console with a free download off the PlayStation Network.

First, DC Universe Online broke ground by being the first American MMO to be played on both PCs and a seventh generation console. Now Sony Online Entertainment is betting that its free to play MMO will make money through microtransactions powered by Sony's online currency Station Cash. Free Realms currently has grown to serve 17 million registered users since it launched on PC in 2009, but John Smedley's crew down in Austin hopes that number will grow even more now that the MMO is available to download for free on the PS3.

"Our games extend the current lifecycle of the console with the added value offer of bringing tens of thousands of people together, in a game world, to socialize at community events, compete in combat activities and engage in a diversity of gameplay experiences, for years to come," said John Smedley, president of Sony Online Entertainment.

I didn't realize that Sony was looking for ways to "extend the current lifecycle" of its flagship console. Wasn't that what Move was intended to do?

Still, Smedley has bet hard on the free-to-play model for its online games, and so far it has been successful. With the casual Free Realms now on the PS3, that model will most likely serve Sony very well. There's something wonky about an MMO trying to gain users by having such a large barrier of entry.

My subscription to DCUO expired when I didn't pay the 15 bucks it asked for. When that game goes free-to-play - not "if" - I will certainly be more inclined to pick it up again.