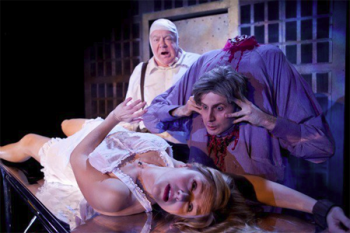 The play so gory that there's a "splash zone" in the seating rows has been extended through the end of May.

Have you heard about the theatrical adaptation of Re-Animator? It's apparently great, made on a shoestring budget, super-gory, and it's a musical. Oh, yeah, and it's also been extended through May, even though it was originally scheduled to end its run a few days ago.

Re-Animator: The Musical is being directed by Stuart Gordon, the same guy who directed the original movie managed to get some of the special effects team that worked on the fim to help him out with the play.

Apparently the musical is so bloody that the first few rows of seats are labeled as "the splash zone" (so the only people who should sit there are the ones who want to get drenched in fake blood). Not only that, but the show features intestines that convincingly strangle characters.

Visual effects creator Shayna Naulin took a flesh-colored material, used for creating the inside lining of swimming suits, and sculpted it. It was very light, like a boa, even after a rubber tube was added to pump blood. And then actor Graham Skipper does his best to make it look like he's really being attacked. (The show also co-stars George Wendt, better known as Norm from Cheers.)

Re-Animator: The Musical sounds like it's a ton of fun. If you happen to be in Hollywood, CA before the end of the show's run, you might want to meander down to the Steve Allen Theater and shell out $25 for what sounds like a bloody amazing experience.

LoadingReadyRun: Imagine If You Will Graham_LRR 92 Comments

The Big Picture: Orphan, Black? - A Look At The New Annie MovieBob 91 Comments
Comments on