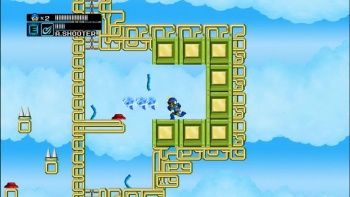 Rumors of a reboot of Capcom's lauded franchise from the 8-bit era first surfaced in April 2010 when Joystiq discovered the trademark filing for the game's title. Then a few trailers and details were released, stating that Mega Man Universe would be 2.5D platformer in the vein of Mega Man 2 for the PS3 and Xbox 360. Like Little Big Planet, players would be able to design their own levels and share them with friends and the general public. The game also would have been the first Japanese release under the name Mega Man as the franchise has always been referred to as "Rock Man" in that country. Unfortunately, that won't happen, because Capcom released a statement on the game's website today saying that all work on Mega Man Universe was ending, citing "various circumstances."

Mega Man Universe was scheduled to come out this spring, so it comes as a surprise for it to be cancelled so late in the production cycle. The "various circumstances" makes me wonder if game development was affected by the earthquake, tsunami and subsequent nuclear problems in Japan.

If so, I'd like to extend condolences for anyone working on Mega Man Universe. It sucks to learn that your game is being cancelled.