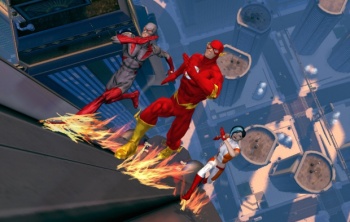 Over half of SOE studios are closing their doors for good.

Update: Sony Online Entertainment has confirmed that it is closing three offices, laying off 205 employees and cancelling production of its spy-based MMO The Agency. The studio intends to focus on developing MMOs based on its EverQuest and PlanetSide brands. The entire statement from SOE is below.

As part of a strategic decision to reduce costs and streamline its global workforce, SOE announced today that it will eliminate 205 positions and close its Denver, Seattle and Tucson studios. As part of this restructuring, SOE is discontinuing production of The Agency so it can focus development resources on delivering two new MMOs based on its renowned PlanetSide and EverQuest properties, while also maintaining its current portfolio of online games. All possible steps are being taken to ensure team members affected by the transition are treated with appropriate concern.

This strategic decision will have no impact on SOE's current portfolio of live games; additionally SOE will transition development efforts for the Denver and Tucson studios' suite of products to its San Diego headquarters. This strategic alignment of development resources better positions SOE to remain a global leader in online gaming and deliver on its promise of creating entertaining games for players of all ages, and servicing the 20 million players that visited SOE servers in just the past year.

This is terrible news, not only for the families of those workers who find themselves out of a job but also for the future of the MMO games business. SOE was one of the big guys, and for them to suffer these kinds of layoffs provides further proof that MMOs are not the cash cows they once were.

The Escapist sends whatever warm fuzzy support it can to those who have lost their jobs.

Original post: Sources suggest that Sony Online Entertainment, the publisher of high-profile MMOs like EverQuest 1 & 2, Star Wars Galaxies and most recently, DC Universe Online, is to close three of the studios under the SOE umbrella, as well as laying off staff in several others.

The rumors started flying after 3D Realms' George Broussard tweeted that SOE was considering looking at closing its Seattle studio. Broussard might seem like an odd source for such news, but it's not the first time he's seemed to be the first to know about something like this: Last October, he tweeted about layoffs at IO Interactive, which were later confirmed by the studio.

But according to sources apparently close to the situation, it's not just the Seattle office that's at risk. SOE's studios in Tuscon, Arizona, and Denver, Colorado are apparently also scheduled for closure. Additionally, SOE has also apparently laid off half the staff at its Austin studio, and a large portion at San Diego. The total job losses constitute around a third of SOE's workforce.

Sony has yet to respond to these rumors, but if and when it does, we'll make sure to update the story.