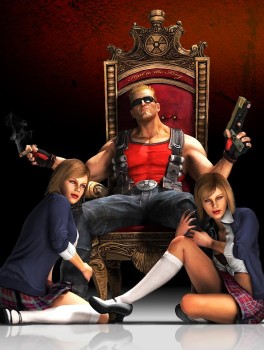 Women's rights advocate Shelby Knox has launched a petition at Change.org calling on Walmart to refuse to carry Duke Nukem Forever until Gearbox cuts the "babe-slapping mode" out of the game.

"Capture the Babe," as you probably know by now, is Duke Nukem Forever's take on Capture the Flag. Babes instead of flags isn't exactly the pinnacle of original thinking, but what's really got the notoriety machine firing on all cylinders is the "reassuring slap" players will need to give to the babes if they start to get hysterical while you're hossing them back to base. Gearbox boss Randy Pitchford clarified on Twitter that it's a "love smack on the booty," not a slap in the chops, but the idea of slapping women to calm them down - and hey, let's face it, the whole idea of portraying them as objects to be captured and carried back home in some kind of latter-day caveman ritual - just didn't go over too well with a lot of people.

Enter Shelby Knox, the nationally-known "feminist organizer, speaker and writer" who came to prominence as the subject of the 2005 documentary The Education of Shelby Knox. She's not happy about the game, so she's got a petition up at Change.org calling for the removal of the slapping, and for Walmart to keep the Duke off its shelves until it's gone.

"To be clear, Duke Nukem Forever makes a game out of physical and sexual violence against women. And Randy Pitchford -- CEO of Gearbox Software which is in charge of the game's release -- thinks that's simply hilarious," the petition states.

"The Capture the Babe mode of the Duke Nukem game, which will be played primarily by young people, sends the message that physical and sexual violence against women is normal, acceptable, and even funny. It's not - and we have to say so," it says. "If Mr. Pritchford [sic] thinks violence against women will boost his bottom line, let's show him otherwise. Walmart is set to be one of the primary sellers of the Duke Nukem game when it is released on June 14th. Tell this family friendly retailer to refuse to sell the Duke Nukem Forever game until the 'babe-slapping mode' is removed."

At last count, the petition had amassed over 5700 signatures and although I have no idea how many it will take to get Walmart's attention, I won't be entirely surprised if the company ends up acting on the demand. Despite the fact that Duke Nukem Forever is rated M by the ESRB and is therefore statistically less likely to end up in the hands of "young people" than, say, an Eli Roth flick, it's an easy, high-profile target whose value as a PR lever with the "thinking of the children" crowd could very well outweigh any losses the company would suffer from its absence.

The irony is that if Walmart does end up banning the game, I'll be compelled to buy it elsewhere even though I have absolutely no interest in it whatsoever, so here's hoping that Shelby Knox doesn't end up costing me 60 bucks as a matter of principle. Duke Nukem Forever is tentatively scheduled for release this summer for the PC, PlayStation 3 and Xbox 360.