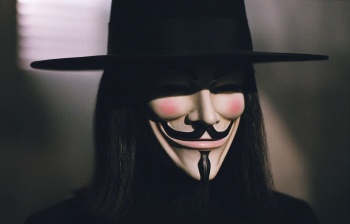 Anonymous has accused Sony of abusing the legal system and victimizing its customers.

Sony's efforts to sue PS3 hackers have raised the ire of the "hacktivist" group Anonymous, who has deemed Sony's lawsuits as "alarming" and "wholly unforgiveable." In retaliation for these perceived infractions, Anonymous is turning its "undivided" attention towards the company, and plans to attack Sony websites.

In a "press release," Anonymous said that Sony had abused the judicial system in an effort to suppress information about the inner workings of the PS3. Anonymous accused Sony of "victimizing" its customers, and intruding on the privacy of thousands of "innocent" people that just wanted to share information about a product they had legally purchased and should be able to do with as they pleased. What's more, the release said that judges and other legal entities involved in the suits were guilty of "undermining the well-being of the populace and subverting [their] judicial mandate."

While Anonymous hasn't been specific about what it plans to attack, it said that its actions would be symbolic. The release said that Sony was treating its customers as if they were just renting their consoles, and so Anonymous would do the same with Sony's web domains. This action, the release read, was to show Sony exactly how wrong their actions against the hackers were.

The relationship between Sony and PS3 hackers is a very complex one, even if Anonymous wants to paint it as a black and white, hackers are right, Sony is wrong, kind of deal. It's hard to know who to root for - ignoring for a moment that what Anonymous is threatening to do is illegal - as both sides make valid points in their arguments. On the one hand, it's hard to disagree with the idea that people should be able to tinker with something that they own, but on the other hand, it's impossible to ignore the fact that that tinkering can often enable software piracy. It remains to be seen, however, whether a few denial of service attacks is going to be enough to make Sony see things Anonymous' way.

UPDATE: It looks like Anonymous has started its assault. As of 13.30 EST, the US PlayStation site is down, presumably from a denial of service attack.