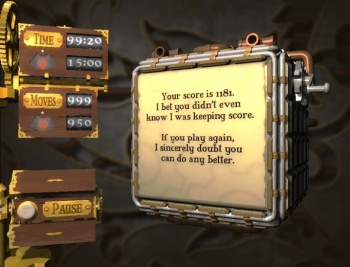 On April 1, Valve innocently unleashed a game bundle on Steam called the Potato Sack. The bundle features 13 games such as Super Meat Boy, Killing Floor, and Amnesia: The Dark Descent. Secretly, it may have also introduced a new Portal-related ARG, with players discovering strange new updates in each of the 13 titles.

Some of these updates are potato references that don't appear to extend beyond the tuberous crop. The ball in The Ball's title screen has been changed into a potato, Super Potato Boy was patched into the world of Super Meat Boy, and potatoes are now scattered around Killing Floor's levels. Pretty silly.

Other updates are just plain mysterious, but potentially related to Portal, leading to the idea that there's an ARG here. The best example so far is in Cogs, where entering "potato" on the main screen unlocks a new level called "<Test>" and some very GlaDOS-like messages. After beating the level, the game writes: "Well, look at that. I guess you got lucky. Everyone gets lucky if they play long enough. Your score is "x." I bet you didn't even know I was keeping score. If you play again, I sincerely doubt you can do any better."

As Cogs runs, the score given for <Test> gets lower and lower, until eventually it becomes 0 and the message is replaced by odd text and symbols. Outside of Cogs, other titles now feature weird glyphs and and other aspects that don't seem like part of a potato joke.

All of the discoveries are being chronicled on this wiki. One theory states that Valve is trying to lead-in to the April 19 release of Portal 2 with the idea that GlaDOS is somehow invading the digital world (and these games). If this is an ARG and not an April Fools prank, there's still a lot of work to be done, so get to it.