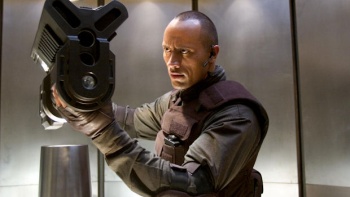 Dwayne "The Rock" Johnson wasn't thrilled with how Doom turned out, but he'd like to give videogame movies another try.

2005's Doom was an interesting attempt at (once again) bringing videogames to the big screen. Like most other attempts with the exception of the first Mortal Kombat - which was still pretty bad but had a cheesy charm to it - it didn't do so well. Not even Dwayne "The Rock" Johnson and his BFG could save it from being anything more than a mediocre action flick.

Despite the flop of Doom and the collapse of the pre-production Spy Hunter movie, Johnson isn't ruling out another videogame movie. Speaking with MTV Movies, The Rock said that he might jump on board another project if the "right one" came along.

"I thought we had an opportunity with Doom," Johnson admitted. "[It] didn't work out the way we wanted it to, creatively. But yeah, if the right opportunity came along and the script is good, sure."

When asked if The Rock had a dream project to cook up, Johnson responded immediately: "[Call of Duty] Black Ops, that'd be bad ass.Let's make it happen, let's do it," he said. One can only surmise that he was being serious, though his second choice threw that slightly into doubt: "That and Black Swan 2."

I don't know about you guys, but I would totally watch a Black Ops movie starring The Rock and Ed Harris, but there would have to be some alterations to the plot.

Instead of doing all of those silly missions, just make the movie an hour and a half of The Rock doing elbow drops on Commies during the Cold War. Come on, that would be awesome!

CineMarter: Furious Seven - The Fastest and Most Furious Marter 17 Comments