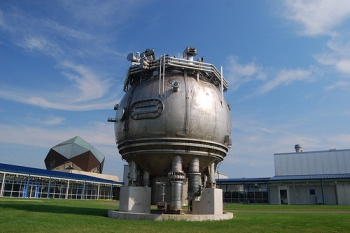 An unexpected spike in Fermilab's atom-smashing data appears to be an undiscovered particle that would introduce a new natural force.

Looks like the Tevatron at Fermilab, slated for closure later this year due to budgetary nonsense, has one more discovery up its sleeve, and it's a doozy. After eight years of throwing protons and anti-protons at each other at near-light speeds, analysis of the collected data seems to suggest that a fifth force of nature called "technicolor" exists in addition to the four known forces of gravity, electromagnetism, the strong nuclear force and the weak nuclear force.

What researchers are seeing is an unexplainable spike in the number of quarks produced by collisions of a certain energy that produce W Bosons (say that 10 times fast). In the world of particle colliders, unexplainable spikes mean one of three things: a statistical fluke, Bill spilling coffee on the detector, or a previously undiscovered particle. The spike is just too damn big to be the much sought-after Higgs Boson, so it must be something else. That something else, as it turns out, could be a brand new natural force.

About 20 years ago, several physicists theorized the existence of a fifth force of nature called technicolor that would act similar to the strong force at high energies. They also theorized that undiscovered particles called technirhos would decay into a W Boson and a technipion, which would then decay into a mess of quarks. The end result- high energy collisions that produce W Bosons and unexplainable quarks -is exactly what researches are seeing now, so you can imagine the excitement surrounding the theory. It would end the search for the Higgs Boson (as Technicolor would already be granting mass, rendering it redundant) and open the doors to a search fo a whole zoo of new, silly-sounding particles.

Though the data looks promising, it's still short of a "five sigma" proof-worthy result, or a result that has a .000001 percent (or one-in-a-million) chance of being a fluke. The data is currently merely a three sigma (one-in-a-thousand) result, so further research will be required. Luckily, the team at the Tevatron already has about twice as much raw, uncompiled data as compiled data that went into their report. And if that isn't enough to hit the five sigma, then the data being gathered by Fermilab's other detector DZero and by the LHC near Geneva surely will put the research over that statistical threshold.