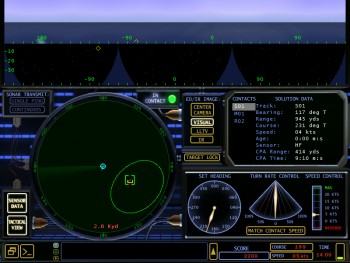 If you think you've got what it takes to hunt enemy submarines prowling the murky depths, the good folks at the Defense Advanced Research Projects Agency, aka DARPA, have something they'd like you to try.

Fair warning: the Anti-Submarine Warfare Continuous Trail Unmanned Vessel Tactics Crowdsourced Simulator is strictly for the hardcore. If your idea of a simulator involves anything you can control with a gamepad, just stop here and go read something else. If, on the other hand, you used to have all kinds of fun staring at a screen for 20 minutes waiting for a firing solution to resolve in Red Storm Rising, this is going to be right up your alley.

ACTUV is a DARPA project aimed at creating an unmanned naval vessel, essentially a large, floating sensor suite, that can track and trail enemy submarines with minimal supervision. But while collecting data is easy, figuring out what to do with it is most definitely not. For all practical purposes, submarines are silent and invisible, so hunting them is a matter of interpreting inputs, mostly audio cues, a tricky business in a crowded and noisy ocean.

In order for the autonomous ACTUV system to have a hope against seasoned submariners, it needs the best and most "intelligent" programming possible, which is where gamers come in. DARPA has integrated an ACTUV simulation into the commercially-available Dangerous Waters game and released it as ACTUV Tactics in order to collect and analyze tactics and results and figure out what works and what doesn't.

"As you complete each scenario in the simulation you will be asked if you would like to submit data about your game play to our database for analysis. The data collected doesn't contain any information about you or your computer, or anything else outside of what you did with ACTUV and how well it worked," DARPA explained on the ACTUV website. "Good or bad, please agree to submit your data for analysis so that we can see what tactics work (or don't work!). And you can always say no - installing and playing the simulation does not collect or send any information until you expressly agree to it at the end of each scenario."

It's very hardcore but also surprisingly entertaining. The visuals are dated - Dangerous Waters originally came out in 2006 - but still more than adequate, the controls are about as simple and intuitive as you could expect in such an inherently complex game and the online leaderboard generates some real competition against like-minded gamers. There's even a forum where you can trade tips on how to track sprinting SSKs without passive sonar.

It's obviously not going to be everybody's cup of tea but ACTUV Tactics really quite fantastic for fans of naval sims and, being free and relatively small, an easy indulgence for the curious. I spent about 45 minutes with it on the first tutorial mission and wound up so engrossed that by the end I was speaking orders out loud. Horribly nerdy, yes, but also a good sign that the game is doing something right.