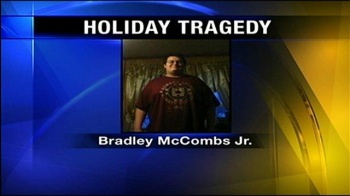 The guy who stole a Game Boy out of the casket of a teenager who was killed on Christmas Day is going to jail - but not for stealing the Game Boy.

Remember Jody Lynn Bennett of Mentcle, Pennsylvania? He's the greasy bastard who stole a Game Boy during the funeral for 17-year-old Bradley David-McCombs, who was killed on Christmas Day while driving to pick up a relative for family festivities. Bennett snagged the system and some accessories out of McCombs' coffin during a public visitation and then hoofed it, but he wasn't hard to track down because the two families know each other. Bennett's aunt Diana said at the time that the whole family was "mortified" by what he'd done.

Bennett's going to jail, but not for the theft, mightily skeevy though it was. He pleaded guilty to institutional vandalism and theft and was given two years of probation, but he was also given 30 days to six months in the slammer for unrelated charges of drunk driving and drug possession. Bennett said he feels horrible about what he did and apologized for his actions. Fortunately, the items he took, which held sentimental value for the family, were all recovered.

His aunt said at the time of the theft that he'd struggled with drugs and alcohol and described him as "just messed up," which is pretty hard to argue with. Still, there might be a hidden upside to all this; if Bennett can grasp just how low a person has to sink to be stealing things out of the coffins of teenagers who died tragically on Christmas, maybe the shock and humiliation will be enough to convince him to be a little less of a douchebag. And if not, well, at least now everybody knows to keep a close eye on him.