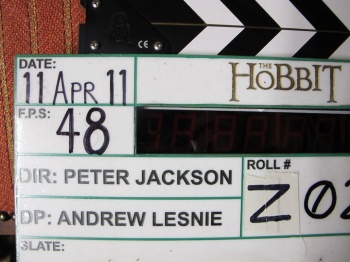 The New Zealand director is spearheading a film revolution to increase the fidelity of the projected image.

A couple of weeks ago we reported on James Cameron's initiative to increase the frame rates of film capturing and projecting from 24 frames per second. Movies have been shown at that frame rate since the 1920s not for any better reason than it was the cheapest way to get decent sound. Now that film technology has improved so much, and with the advent of 3D, Cameron and a few other directors are championing the transition to frame rates as high as 48 or 60 FPS. One of the directors mentioned was Peter Jackson, who confirmed on his Facebook page today that he is indeed shooting The Hobbit at 48 FPS and so far the results have been amazing.

"We've been watching Hobbit tests and dailies at 48 fps now for several months, and we often sit through two hours worth of footage without getting any eye strain from the 3D," Jackson wrote. "It looks great, and we've actually become used to it now, to the point that other film experiences look a little primitive. I saw a new movie in the cinema on Sunday and I kept getting distracted by the juddery panning and blurring. We're getting spoilt!"

Jackson explained that he wasn't sure why the standard of 24 fps lasted as long as it did. "We have lived with 24 fps for 9 decades - not because it's the best film speed (it's not by any stretch), but because it was the cheapest speed to achieve basic acceptable results back in 1927 or whenever it was adopted."

The director acknowledged that some will balk at the change but he's confident that he is riding the format shift wave. "Film purists will criticize the lack of blur and strobing artifacts, but all of our crew--many of whom are film purists--are now converts," Jackson said. "You get used to this new look very quickly and it becomes a much more lifelike and comfortable viewing experience. It's similar to the moment when vinyl records were supplanted by digital CDs."

As Jackson notes, The Hobbit will be the first widely distributed film to be shot and projected at 48 fps when it releases in December 2012. His partners at Warner Bros. are on board and there will likely be 10,000 screens worldwide who will be able to handle the new format by then.

A big movie like The Hobbit is a great vehicle for this kind of change, and I'm all for it. Hollywood outsider Peter Jackson is the perfect guy to champion the shift to the higher fidelity frame rates that will revolutionize the film industry.