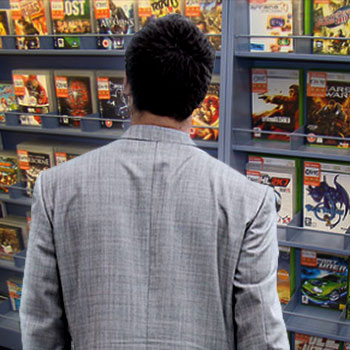 There was more to Blockbuster than just movie rentals and bad business decisions.

Videogames are a pretty big investment. Sure, they last longer than most other forms of entertainment media, but the majority of gamers can't afford to spend $60 to buy a new game whenever the mood takes them. Rentals, however, are another story. You don't get to keep the game, but it's a heck of a lot easier to find eight bucks and rent a game than it is to scrape together sixty and buy it. But with rental stores slowly dying out like the last dinosaurs in the herd, it's getting harder and harder to find places that actually do rent games. In Issue 301 of The Escapist, Victor Kretzer talks about what the loss of rental places means to him, and to gaming in general.

Having given up cable TV, Netflix, and my World of Warcraft account, I'd become increasingly desperate for some entertainment. I was driving home from the store when I saw the big blue sign with yellow writing: Blockbuster. I went in, determined to rent just one movie ... Instead I became hooked by the familiar green font of an Xbox 360 logo. I scanned the rows of games, checking out cover art, reading descriptions and selling points, and admiring screenshots. As I pored over these titles, taking in the different features of a myriad of genres, I suddenly realized I had been missing out.

I began renting games as often as I could afford them ... I burned through titles in a way that I had not done in years: fighters, shooters, hack and slash, action adventure. I was playing anything and everything, and I was having a blast. In one of the toughest periods of my life, videogame rentals didn't just supplement my passion for games, they redefined it.

Which is why, for me, the past year has been a sad one. Today, Hollywood Video is a distant memory. My little town use to have three Blockbusters. The only lingering presence of the once mighty chain is a few tombstone kiosks that stand outside select grocery and convenience stores, and the one thing those kiosks don't rent is videogames. The nearest remaining store is in a city 45 minutes away.

Once the likes of Blockbuster are gone, there won't actually be anything waiting to take its place, or at least, not anything that fills quite the same role. You can read more about Kretzer's experiences in his article, "No Later Than Monday."