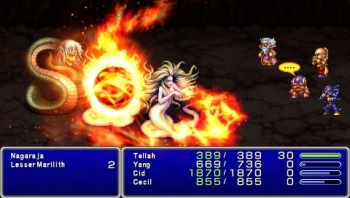 Square's Final Fantasy IV was a milestone for the series, as the first title on a console other than the NES. The SNES RPG offered memorable characters, an amazing soundtrack, and combat utilizing the new Active Time Battle system. Final Fantasy IV's original story director Takashi Tokita has surprisingly revealed that the game was given a boost by Star Wars and Formula One racing.

1up caught up with Tokita to talk about the PSP's upcoming Final Fantasy IV: Complete Collection, which unlike Final Fantasy IV DS leaves the game in 2D and beautifully polishes the visuals. It also adds The After Years, which continues the story after the original game, and adds a never-before-seen scenario to bridge the two titles.

The Star Wars link is obvious once you're looking for it. Tokita says: "Final Fantasy IV has Biggs and Wedge and a Darth Vader type of character in it. We certainly can't say that it's a coincidence. Definitely an homage." Not to spoil the game's story or anything, but there's a very Darth Vader-like twist regarding Final Fantasy IV villain Golbez, who also dresses in a similar style. 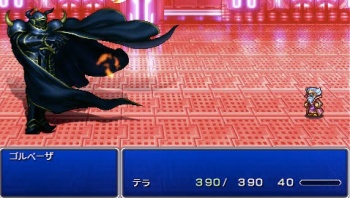 The characters were theoretically doing their own laps like an F1 car at different speeds. Active Time Battle was used in multiple future versions of Final Fantasy after Final Fantasy IV, so if it weren't for race cars, we may have been playing the series in a completely different way. That's definitely not something I ever thought would ever be true.

Final Fantasy IV: Complete Collection will be available for the PSP on April 19, 2011.