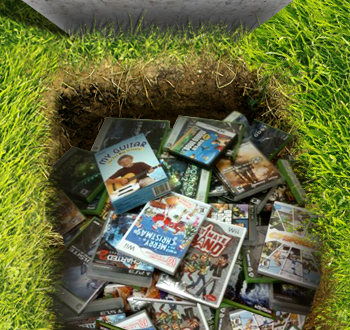 You can find great games in humble places, if you're just willing to look.

Usually, it's not hard to see how the games in the bargain bin got there. Whether they're obscure titles of limited appeal, or hastily rushed out games trying - and failing - to cash in on some fad or other, it's easy to see why no one wanted them. Mixed in with all this junk however, are a few hidden gems, and in Issue 301 of The Escapist, Brendan Main says that the dedicated bargain bin delver can sometimes find wondrous treasures hidden within.

I just can't kick the bin. Any time I visit a store that has one, it's my first stop - even if I've checked it recently, and even if I'm sure the contents haven't changed. It's not exactly a chore. It's more a compulsion. I can't not do it. ... And of course it's all rubbish ... But that's the thing about us bin-divers, and our rummaging ways - we aren't much for logic, and we live for the long odds.

Because it only takes one score to kindle someone's rummaging spirit, to forever beckon them to the bin ... One score, big or little, can be enough to convince you that the bin is worth a second look, that it's not just knockoffs and shovelware - that there's gold in them thar hills.

Sometimes it's strictly a money thing - a cracked copy of The Misadventures of Tron Bonne or Valkyrie Profile, or a mint cartridge of Star Fox: Super Weekend. Sometimes it's a question of quality, like finding Grim Fandango sandwiched in among the Learn Spanish Easy CD-ROMs. And sometimes, it's to give an underdog a chance - maybe Sword Lord 7 is a misunderstood gem. Maybe it's a masterpiece! Or maybe it sucks, and you're down five bucks. And, really, what's five bucks? A box of Kleenex and a bad burrito.

Most trips to the bargain bin will end in disappointment, but not all of them will. You can read more about the thrill of that one special find in Main's article, The Mysteries of the Bin

Letters to the Editor: The Broke Gamer The Escapist Staff 0 Comments
Comments on