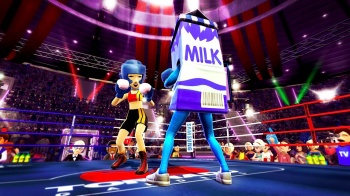 Wait, do pizzas even have faces?

While videogames have been accused of encouraging sedentary, unhealthy behavior, other games have tried to get gamers moving - and games have been part of some exercise regimens ever since the days of DDR. The newest DLC for Kinect Sports, however, makes its weight-loss goals quite explicit.

Calorie Challenge is a new mode for Kinect where players will face off against anthropomorphic food (or people dressed as food) in a series of events designed to burn as many calories as a serving of said food typically contains. Going head-to-head with Chocolate Challenger will require a 416-calorie workout, for example, whereas Peppy Pizza is a bit lighter at 306 calories. Steady Celery, meanwhile, clocks in at a meager 25 calories - that should be easy.

There are six Calorie Rivals in all:

This actually sounds like a rather intriguing idea, to be honest, and more games that could help young kids get off the couch and move around are welcome in my book. (Or they could just go outside).

Calorie Challenge is out on Xbox Live for 320 MS points ($4) at the end of April.